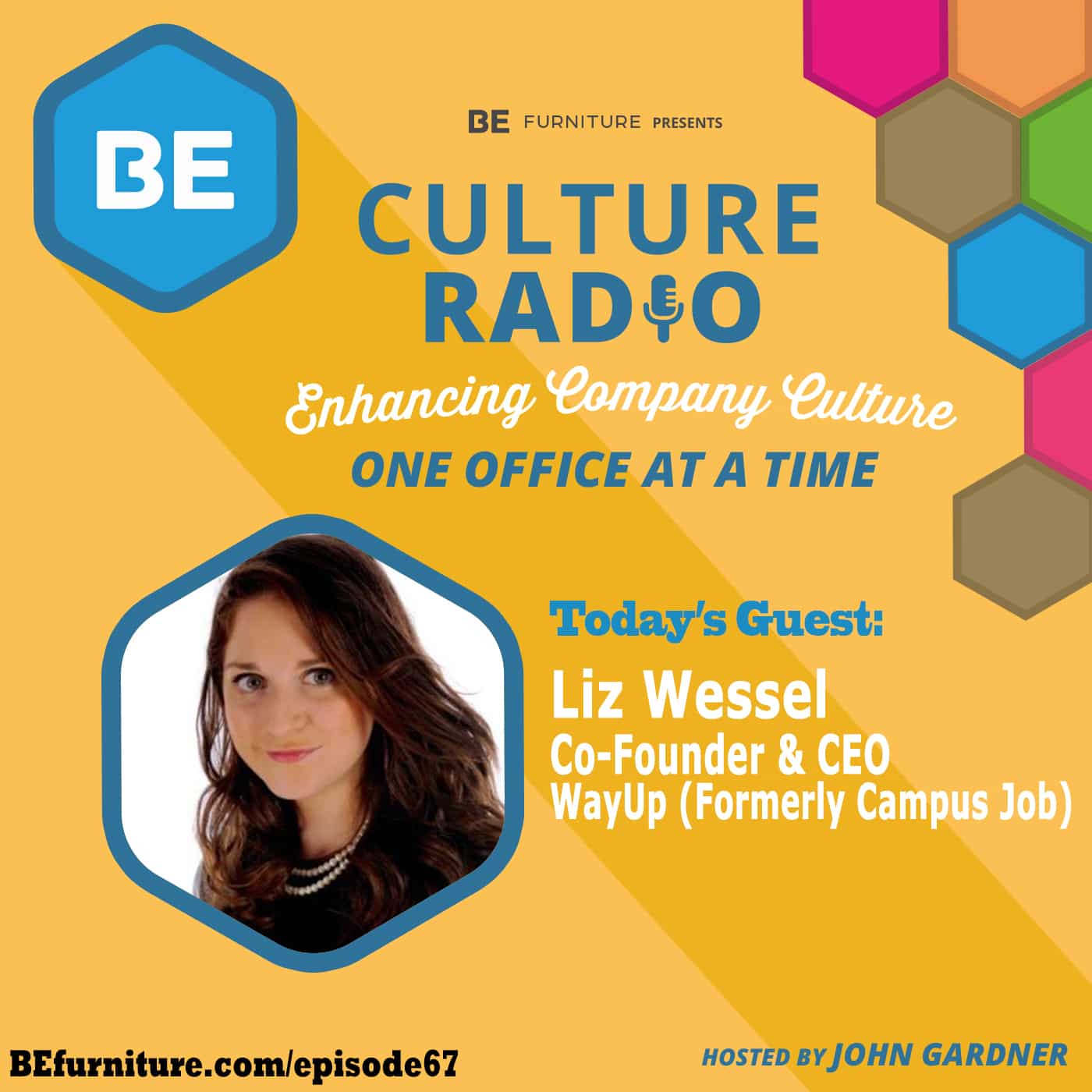 Episode 67: Training Yourself to Trust with Liz Wessel and WayUp (Formerly Campus Job)

Who is Liz Wessel and the key takeaways in this episode?

Liz Wessel is the CEO of WayUp, a company with a novel approach to getting college students onto the first rung of the career ladder. She is a passionate believer in the significant effects that physical environment can have on office culture, and WayUp’s office simply has to be seen to be believed.

Listen to this eye-opening interview and learn:

Share with us the challenges of being a very successful executive who happens to be a female and young. How does that work for you? Culturally, how do you navigate that so that it doesn’t inhibit where you’re going?

Answer: I haven’t been successful quite yet. I have very high standards for success. I think that WayUp is on its way to being successful and we’re working towards it. We have a long way to go before I’ll consider myself successful but I would say that the number one thing is that the female thing almost never comes into play. The very few times it does, I probably don’t want to work with the person who’s making it an issue in the first place. It’s almost like a filter where if you’re bringing this up or treating me differently then I’m just going to say, “Have a nice day.” It has almost never come up but certainly I could always find stories about fundraising as a woman. […] I’m very happy to say that I’ve never had any experience like that. […] In terms of my age, that’s something a little different. I think most of my employers fell into a meeting with me and might have had low expectations at the start, but I was always able to raise their expectations by the end. Age doesn’t become a thing except maybe at press meetings. Sometimes they’ll raise an eyebrow. […] It helps that I’m only a few years out of college as a majority of our users are in college, so I can really connect with them. […] So far it’s definitely been more of an advantage than a disadvantage.

How does your facility match your culture, and how does it help you retain the people that you currently have with you and help you attract people to your company?

Answer: This is something I’m very passionate about. Back when we started this company we ran it out of a university library because we didn’t have any money to have an office space. We figured, “Why not be around our users, college students?” So we got a membership to the library and we were constantly around our users. […] Because our company is all about college students we decided to make our office look like a college. There are six big conference rooms and each one is themed with something from college. For example, one is themed as a frat house or sorority house. There are pong tables set up against the wall. […] We’re excited about having such a fun theme to it.

Can you help some of my listeners and give them a tip about something that you’ve come across, that you’ve seen in your travels, as they build their companies and strong cultures?

Answer: I was given some advice really early on and it was super eye-opening for me. It’s that no one really knows what they’re doing, for the most part, in this space. The people who are succeeding are really smart at taking really good guesses. There’s this whole thing I hear about with imposters in general. I’ve heard it a million times that, “Do people know that I’ve never started a company before?” I’ve never hired a team this big before. It’s important that you work with people you trust and that you trust yourself more than anything. Don’t be afraid of the fact that don’t really know what you’re doing.

Culture According to Liz Wessel:

What Liz Wessel Wants Her Company to BE:

Where to Find Liz Wessel: