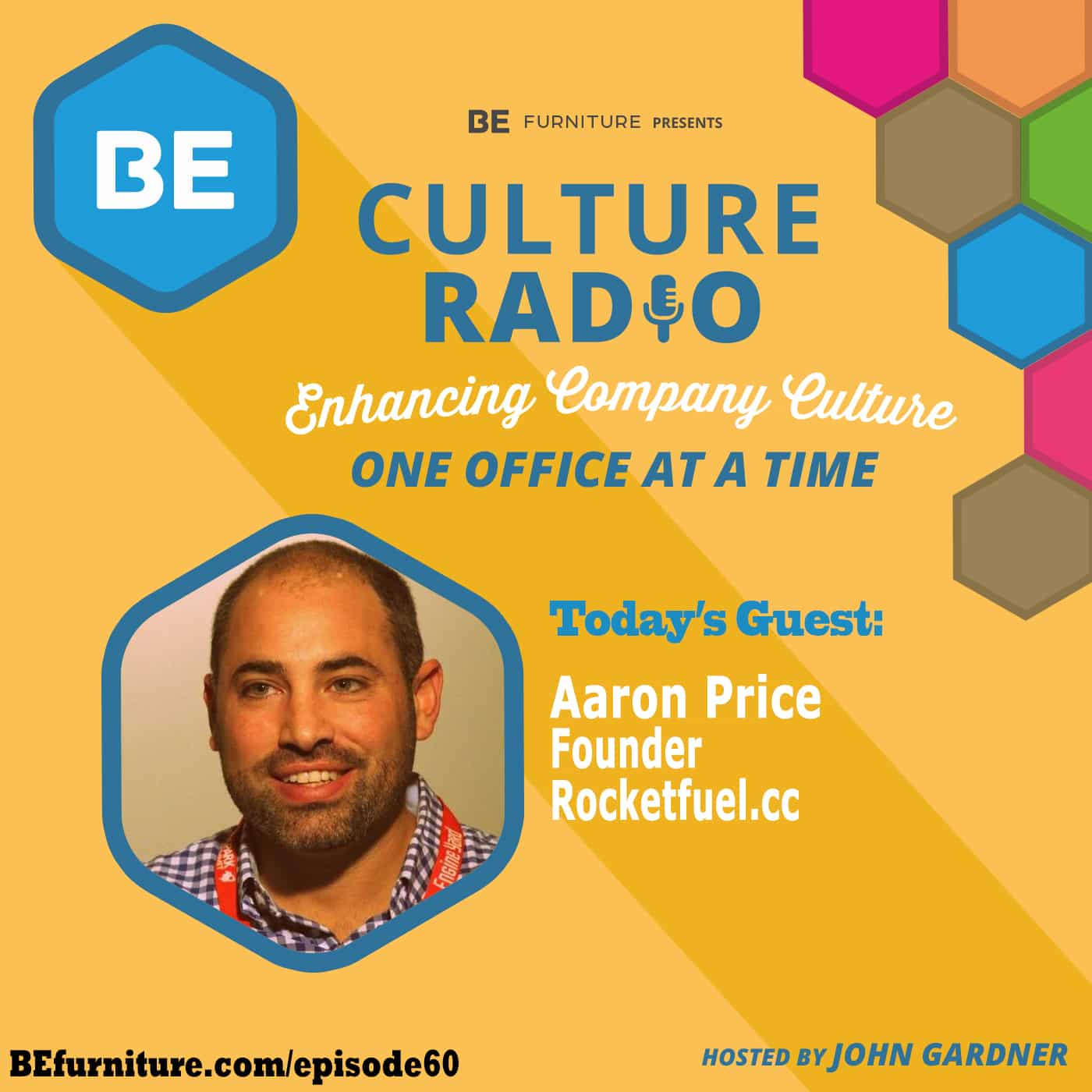 Episode 60: Train and Retain Your Workforce with Aaron Price and Rocketfuel.cc

Who is Aaron Price and the key takeaways in this episode?

Aaron Price has a lot of useful knowledge and fascinating insights to share, having been part of the New Jersey tech scene for several years now. His journey has culminated in the founding of Rocketfuel.cc which aims to use unique experiences to help you to train and retain your workforce.

Listen to this useful and instructive interview and and learn:

People haven’t really disrupted industry. You just go along and people aren’t really paying attention to what people really want and how cultures have changed and how industries have changed and all of a sudden they’re out in front doing something no one else is doing. We’ve tagged it ‘disrupting’ or ‘hacking’. You and I know a bunch of different terms for it, but there’s solving a problem and creating a business model and a ‘why’ when everyone else is talking about ‘what’. Give me your thoughts on that a little bit.

Answer:I think that the world has changed dramatically with mobile technology and industries are being turned upside down in the process. Maybe for some of your younger listeners that’s been their whole world, but I’m 36 and only for the last ten years or so has mobile technology been a major part of our world. I started my first internet company in 1999. It was one of the first online food ordering services. You’ve got to remember what the world looked like then. The number one question we would get from restaurants we would talk to about enabling online ordering was: “Who is ever going to want to order food online?” It was a huge problem to get them to understand that this was the direction that the world was moving. Now, the internet is in your pocket. People are expecting industries to be available and all services to happen in some way, likely on a mobile device. There are a lot of profitable businesses that are rooted in older technology or older models. That, I believe, all will change.

What was the tipping point for your tech meet-up? Give us a little background on the tech meet-up.

Answer: I really did think that the first event might be 20-30 people sharing their stories. I did invite a speaker but I didn’t ever think it would grow into the entity that it’s become. So, the first three months we were in a bar and at the first event I expected 20. I think we got 80. The second event we had 120 with a wait list, and the third was 250 with a wait list. That continued almost exclusively every month for the last 5 years. We’ve had a wait list with 150 or so people in the room with really fantastic speakers. The model has changed a bit but I think when we were invited into Stevens, New Jersey we’ve been hosting the event almost every month since. That was a big tipping point. It gave us a lot of credibility to be associated with the school. It gave us a much better venue. They happen to be on the waterfront which looks right at the great landscape that is New York City. It changed the dynamic a lot. I think the content has built momentum. Inviting great speakers has led to other great speakers.

Can you share with us a story of how culture in a start-up has accelerated or driven a business?

Answer:Overall, what makes start-ups succeed is their ability to be fast and smart. A lot of times start-ups get things wrong and their ability to change gears, or pivot as some people like to say, into a different model is often the difference between winning and losing, and lots of them lose. I think that when a culture is created where not just the founders but the entire workforce, whether it’s three people or 300 people, can understand that small changes and small improvements and data-driven decisions that help them make better choices each day collectively make a huge difference in the company. I can think of companies where their selling efforts weren’t working well but because the company culture allowed for people to speak up and encouraged people to speak up it allowed for them to learn about more effective ways to reach their potential clients, where in other companies the founders may have said something that discouraged them from speaking up and they were told what to do and if what you were told to do wasn’t working then the company was destined to fail.

Culture According to Aaron Price:

I think it’s the attitude and ambition and goals of the collective workforce, and it’s typically set by the leadership of the company.

@justaddfuel” “If you don’t have a seat at the table, you’re on the menu.” #quote #BECulture

What Aaron Price Wants His Company to BE:

Where to Find Aaron Price: