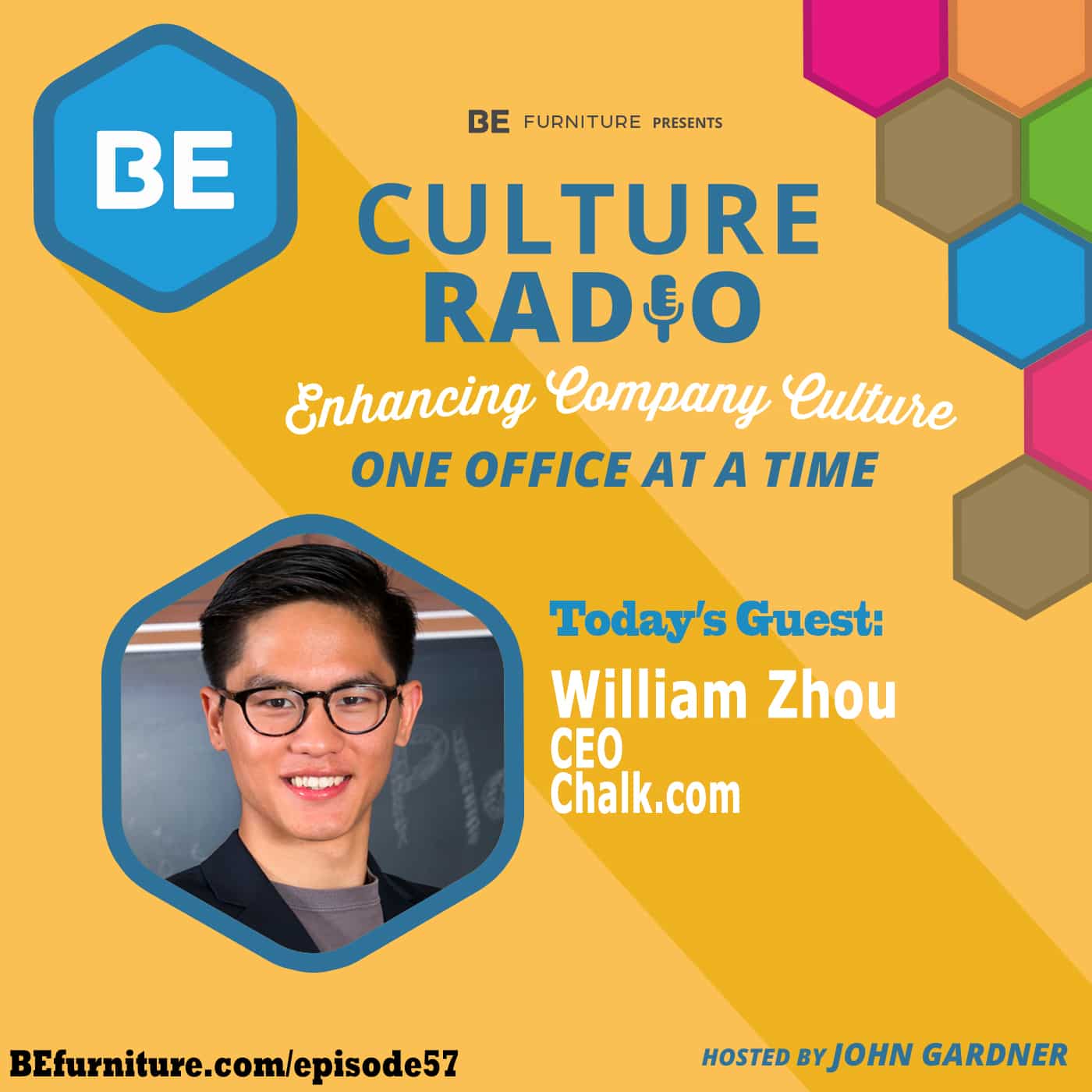 Episode 57: Supercharge Your Classroom with William Zhou and Chalk.com

Who is William Zhou and the key takeaways in this episode?

Some ideas are simply revolutionary in their field of expertise, and William Zhou’s Chalk.com is exactly this. What’s more, William has been an entrepreneur in the field of education since his very own school days. If you want to have a bigger impact on your first day of your new job, then you would do well to follow William’s advice.

Listen to this enlightening interview and learn:

How do you make Chalk.com’s facilities match your culture?

Answer: In January we moved out to a new office so in January we were able to be a bit more creative in designing the culture and in building things like facilities for that culture. One of the main things was having a huge bookshelf and having a selection of a wide variety of books on just keeping it real. We also wanted to make it an open space environment where people can just bump into each other and have that serendipitous connection and talk, but at the same time it’s having areas where you can just relax. Having that changes the way you’re working and that matters a lot because if you’re stuck in a cubicle all the time you’re not going to foster a culture.

Could you tell my listeners, the guys that are building companies and trying to create these tremendous cultures, what the experience of funding is like?

Answer: It’s definitely exhilarating and I remember when we got that, and the company celebrated a lot. The funding is really there to boost and to grow out faster and set a new pace. You know, we are already doing it with an impartial – getting a new space just a little bit faster. I think a lot of times funding is also seen perhaps too much as a success rate. It is great to get capital investment but at the same time it’s what we do, what the culture is like on a daily basis that truly matters to me as a CEO.

Perhaps you can share a tip with my listeners, who are building these companies and creating these cultures. What one thing would you tell them to pay special attention to?

Answer: I think one obvious one is cultures but I’ll leave that one out because I think we’ve talked enough about that. Obviously, as an entrepreneur you do have to care deeply about culture. One thing I always like to say is: passion. Building a company is what a lot of people like to say is “an overnight success, an amazing overnight success,” and you don’t hear about the seven years before that. So we like to joke about it being a seven year overnight success. You’ve got to really stick it out – there are going to be tough times, there are going to be those low times and there will be those high times. When we got our funding it was an amazing time but before that I had to go through some tough times in securing that. You’re going to go through your ups and downs like crazy and you really have to be passionate about whatever industry you’re choosing or problem that you’re solving.

Culture According to William Zhou:

Company culture to us is not about a Foosball table or perks or amenities, so to speak. Those are great to provide for employees but company culture is how you interact with each other. So, for example, it’s the ability to say, “Hey, I don’t think that’s right,” or you know, just be really honest and call each other’s BS. I think we can make things so much better despite someone perhaps on a lower level telling someone one a higher level. So, having that culture is absolutely important for us.

What William Zhou Wants His Company to BE:

Where to Find William Zhou: