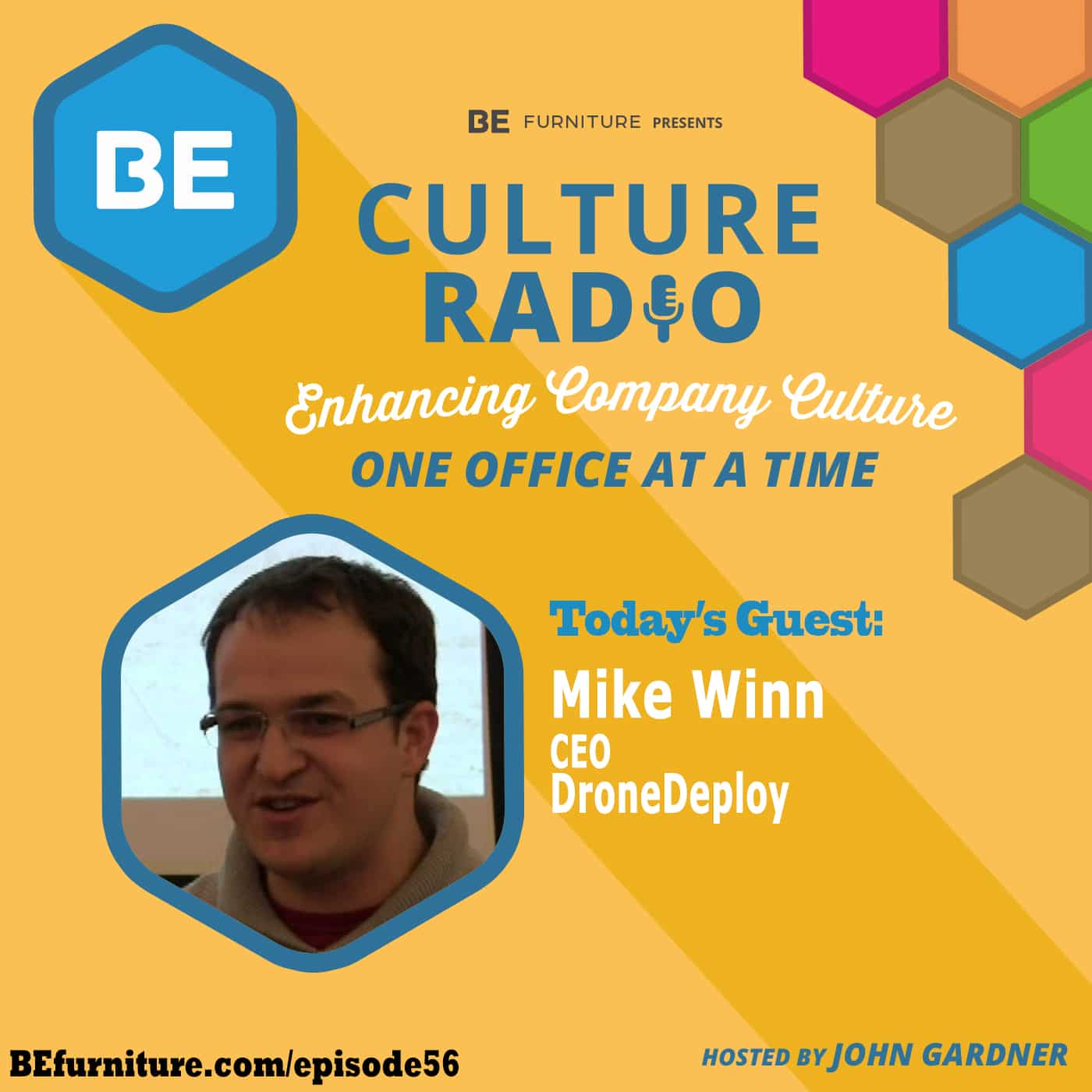 Episode 56: Making Machines Work For You with Mike Winn and Drone Deploy

Who is Mike Winn and the key takeaways in this episode?

Mike Winn and his company Drone Deploy believe that there’s much more to flying drones than one might first think. He is of the opinion that we should be doing our very best to find innovative ways of making drones work for us. In his own words, “Flying is just the beginning”.

Listen to this informative and enlightening interview, and learn:

How do you view the physical part of your facilities – where you sit, how it looks, how it feels to the people you work with – and how that works for you in retaining the people you have and getting people to join you? How does that physical side work for you?

Answer: An office is in some ways a representation of what the company thinks is important. We’ve never had the fanciest offices. I was at Google and thought it was cool. Yes, it’s one of the most important things for our company and there’s a great article in Fortune and it talks about our office and how it’s different from the other drone companies in that we had a simple office. It wasn’t expensive as that’s not the most important thing to us. The most important thing is actually getting stuff done and having a company culture is not about having the fanciest floor. Of course, we are now trying to improve our office but I think that the big thing for us is to immerse the whole team in what it is to be a drone company, to have drones around, to live in this future where robots do things for you at the touch of a button.

You just got an amazing round of funding, so share with our listeners who are about to go down that path what that’s like, because I don’t think a lot of people who are entrepreneurs who have started down that path have any idea what the funding gauntlet is like. I’d like to hear it from your point of view, Mike. What was that like?

Answer: It is a gauntlet of sorts. This is our second round of funding and our A round was way different than our seed round. One thing that we’ve learned in this process is the headline is always how much money somebody raises, and actually what the most important thing is not the amount of money you raise but the people you start working with. That was the big thing that we actually worked on in our series A. How do we find the right people to help us with our business? These venture capitalists, they’re all in venture capitalism for a reason. They’ve all got tremendous experience. They’ve done amazing things and they all have a wealth of knowledge of what can really drive your business forward. So the whole process of going and raising money was as much about relationship building as it was building pitch decks and doing pitches.

Give my listeners a piece of advice as they start to hire and build their businesses around great teams and great culture, because I think you’ve got it figured out to a great degree, and if there’s something you want to share with them that you would say, “Hey guys, as you start out keep an eye on the following things,” what would that be?

Answer: This is something that I’ve learned a couple of times, and it is something that many people know but it is worth reiterating. There’s a very simple thing when hiring your first staff, that there are no ‘buts’. If there are, you shouldn’t be hiring that person. We’ve learned that lesson before. When you’re bringing people into your team they are actually going to become part of your company and your company’s going to change because of them. It’s really important that you’re really sure that the people you hire are the right people.

Culture According to Mike Winn:

It’s the fundamental beliefs of the people within that company. What do they think is the correct way to build a company? You were talking about Google earlier and I think the really obvious and fundamental thing is that people matter. Treat them right and you’ll get a massive amount out of it. If you pay for them to work then they’ll work. If you put food in the office they’ll like you for doing that because there’s more time at the office, because they’ve got less to think about. All their needs are met. That’s a very simple thing. That does happen in a lot of tech companies that agree that it’s not that people do these things just to get maximum productivity. We argue for them. We can argue to see if there’s an advantage for them. Fundamentally, you’re a company made up of the people within it and the better you treat those people the stronger your company will be.

What Mike Winn Wants His Company to BE:

Where to Find Mike Winn: