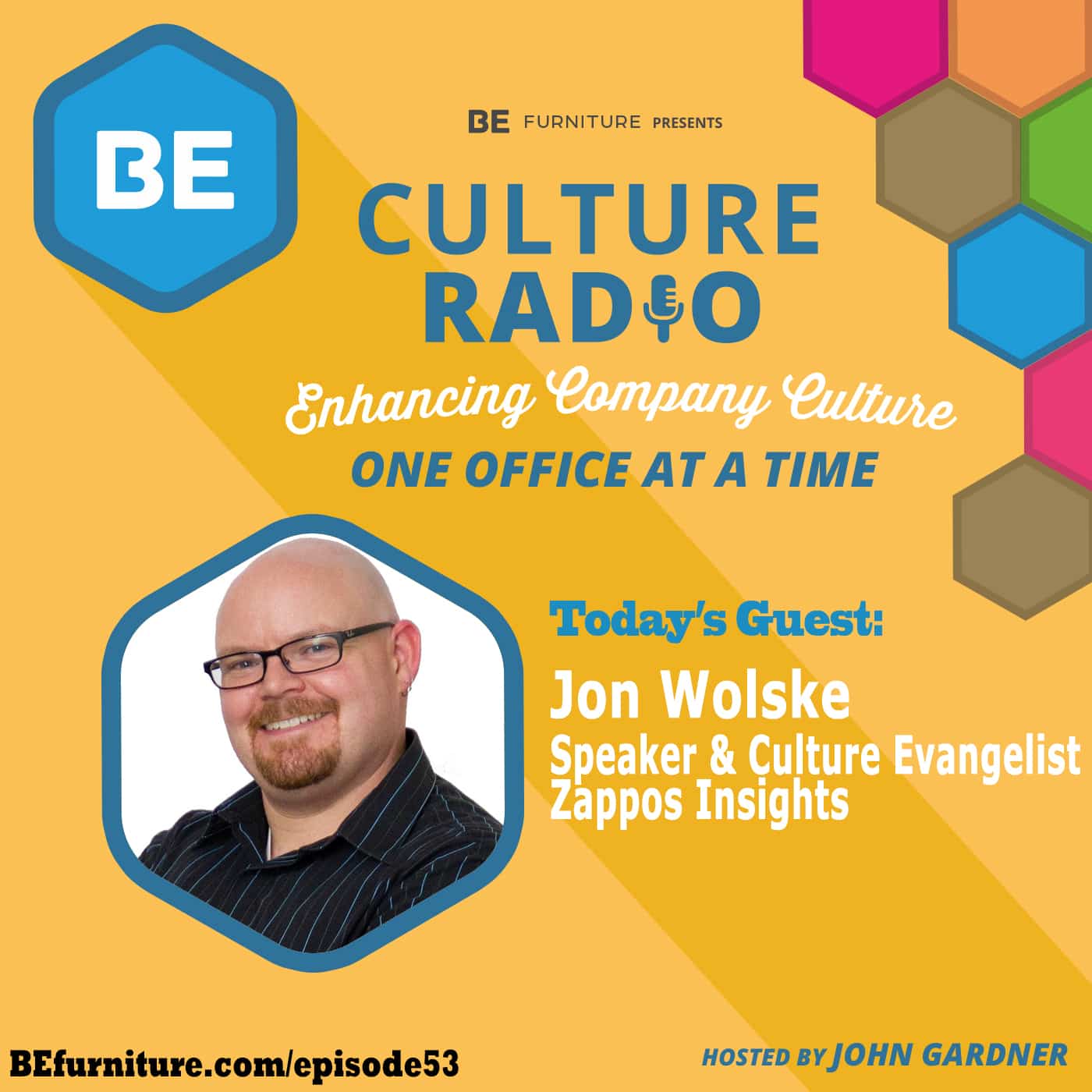 Episode 53: Create Fun And A Little Weirdness With Jon Wolske from Zappos Insights

Who is Jon Wolske and the key takeaways in this episode?

Our guest today is speaker, cultural evangelist and rock star, Jon Wolske. Listen as Jon explains how crucially important a unique culture is to every company and how Zappos Insights has reached the heights that it has.

In this interview, you’ll find out:

What makes the culture at Zappos Insights so unique?

Answer: I think that every company or organization has a unique culture. Ours clearly states that to create fun and a little weirdness is one of our core values. Part of what makes our culture specifically unique is that we call out being yourself and working hard but not too hard, which is at the core of those value-related words like creating fun and a little weirdness.
Our personality is there. There’s a feeling to the office that you can’t describe to anybody. You just know that you’re coming into a workplace, not just a workplace, but you’re coming into a place where people belong and a place where people get to express themselves.

Can you give a story where culture really accelerated Zappos’ growth?

Answer: We defined our culture in 2005-2006 and committed to living it in everything moving forward. So really our growth as a company, our growth in our selection of products, everything has fallen back to how we’re doing it because we made a decision based on the core values and culture. So, we had somebody who was buying something for repairing golfing clothing, and that person thought that golfers really want a good pair of sunglasses so we should sell sunglasses. So, just like shoes it’s a category – or whisky that costs $100+ for the customer – it’s something that you have to try on to agree that it’s the right one. It could just be a general risk and somebody could have said “No, that’s not a good idea,” but this guy was just sure about the whole idea. One of our core values is to be passionate and determined, be adventurous, creative and open-minded, so this guy said “You know, we have a relationship with this company that sells sunglasses as well as footwear and clothing. Let’s just see what happens.” They ordered some sunglasses and they put them on the site and created content for it like they would for any other product, so sunglasses are a really good category for us. There’s a lot of stories like that which we don’t even have written down anywhere. It’s just allowing people to say “Here are our core values and I think the right next step is this, and here’s how it goes back up to those core values.” The success of the company in general has been because of the culture.

What is the biggest mistake you’ve seen entrepreneurs making as they build a company and a culture? Is there something you see time and time again?

Answer: I think it’s really trying to rely on anybody else’s culture. It’s about discovering who you are, the history of your brand. What’s put you where you are today? What decisions have taken you in different directions that have made you who you are today? Who are the people in the organization who are making it successful? Who are they really?

So many different companies write words on a document or “If we copy, you know, do what Zappos is doing.” While every company can have fun and a little weirdness as part of their culture, what if it doesn’t resonate with your people or clients or your brand? A lot of people think there is an easy way out and I think with culture you’ve got to invest in it and pay the right attention to it.

Culture According to Jon Wolske:

The main parts that make up an organization or company culture are the attitudes, feelings, values and behaviors that characterize and form a group and its members.

@ZapposInsights” “Be the change you want to see in the world.” #quote #BECulture

What Jon Wolske Wants His Company to BE:

Where to Find Jon Wolske: